Colombes station, Hauts-de-Seine, 21st of december 2006, 7h16 am. Standing on the rails with her black coat, Gloria Lopez hit head-on by a train, dies inmediately. Inside her pocket: Ron Hubbard’s Statement of faith, fundraiser of Scientology’s church.

This 47 year old Spanish, legal secretary and divorced mother, leaves behind her writings where, reports a source close to the investigation, she links her moral an financial distress to Scientology, classified in France among the sects by several parliamentary reports, and of which she was a member.

In the eye of the storm, the income paid to the Organization, for who she left her friends, home and family at Normandie in order to move to Paris.

Over 260 000 € in training and books to evolve in the ‘operating Thetan’, differents levels of Scientology knowledge.

Even the appartement she had inherited in Spain goes there: guided by a “financial adviser” from the church, she sells it and goes into debt to acquire an apartement she doesn’t like, supposed to bring in more-value to inject there too in the organization. (Le Point)

Consulted by our editorial staff, a former member of the Scientology who knew Gloria Lopez at that time testifies to her introverted and reserved personality.

Following this tragedy, her two children and their father lodge complaints twice: in 2007 as well as in 2011, in particular for abuse of weakness and swindling in an organized gang. (Atlantico)

However, justice has failed to find three women whose hearings would have been of paramount importance for the investigation, among them Juliette Wagner-Quercia.

The judge considers these people to be the key to the case, in fact, they had bussines with Gloria Lopez in the months previous to her death. Scientology leaders in France insisted that they did not know where they were (Tony Ortega).

In 2016, following the requisitions of the prosecution, the justice issued for a dismissal (Le Parisien).

As a conclusion, this history of Gloria Lopez is a snub for the french Justice.

She introduced Gloria Lopez to the Scientology Church (Atlantico).

November 2019, two months ago, she was in charge of the Letter Regristration AOSH EUROPE, so she was who received all the appliances to the Scientology Church.

If we refer to the attached document, Juliette Wagner seems to live there.

3. Additional information about the document

Different sources keep contacting us to provide us with different informations of all type: mails, digital documents, paper documents…

We have recently received over 3kg of Scientology related material, including the attached letter of this article, so it is authentic and we have got it legally.

After reading carefully every detail, we have started scanning every document, but in our hands remains the original one.

In order to protect the identity of the person mentioned on the letter, we have blacked out the following informations:

Letter from Juliette Wagner to a member taking the Scientology knowledge lessons :

Taking into consideration this document and all the subjects viewed before, some questions come across our minds :

The presence of Juliette Wagner in the United States in the 2000s is certain, even her son (Eric Quercia) says on his Viadeo Profile (Archive.org backup available here) that he stayed 10 years in the United States, it is very unlikely that he moved to the States without his mother for such a long time :

But what did he do in the United States ?
Where was he exactly ?
We can find the answers to these questions on his Viadeo profile as well : 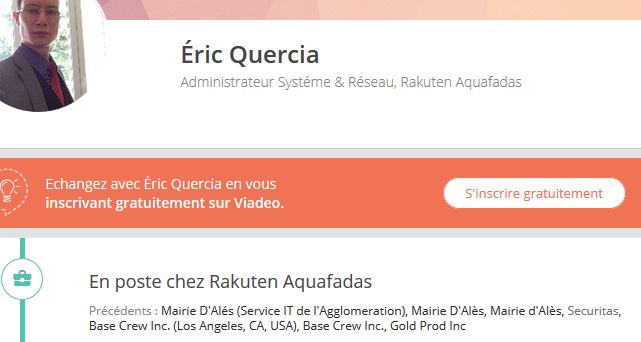 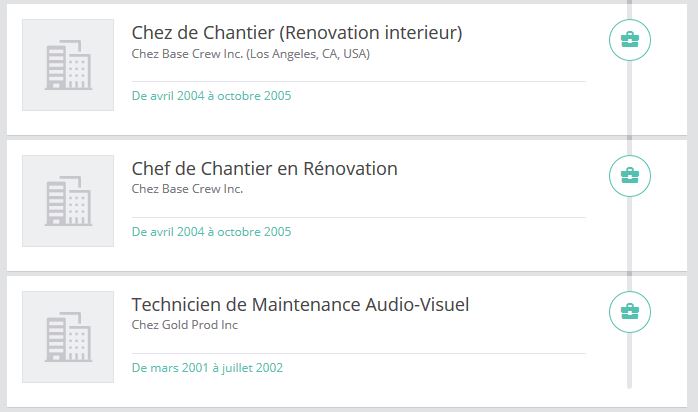 With our knowledge of the field and these informations, we have deduiced that this is the Gold Base or Int Base as they call it, an important location..for the Scientology. 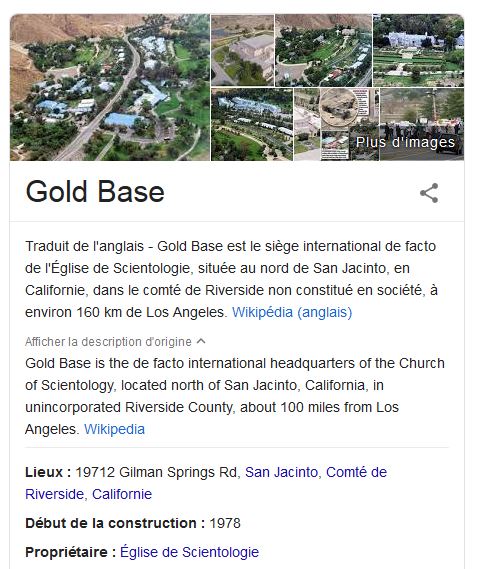 Google screenshot with the key words ‘Gold Base Scientology’.

As you can see in the screenshot, Gold Base is at 160 km of Los Angeles.

This place is home of the Golden Era Productions Studio, among others, where Scientology makes its films (Eric Quercia said that he was an Audiovisual Maintenance Technician…do you follow ?)

This article published by The Figaro in March 2015 says “Gold Base, an old 210 hectare holiday village located in the desert, east of Los Angeles , which now hosts training courses for the faithful…”.

This article published by Tony Ortega in September 2016 (with two magnificient videos of the place recorded with a dron which you can watch here and here) mentions multiple times the different renovations that had taken place in the facilities (Eric Quercia said that he was a ‘Site Manager Renovator’…do you follow ?)

Gold Base, Los Angeles, films, renovations, and of course Scientology: everything makes sense, the circle is complete. 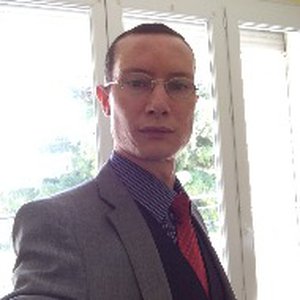 It shouldn’t be that hard for the police or the justice to interrogate Eric Quercia, according to his Viadeo profile, nowadays he is working for an enterprise based at Montpellier.

Also, it shouldn’t be hard to check his phone records with his phone operator in order to get his mother’s number and to localizate her in real time.

The authorities could do the same thing with his email account, so they could trace the IP adresses used to log in, this would provide a previous position history of months, even years.

Logically, this would confirm all these facts.

Among these facts, the mail on this letter, juliette@aosheu.org, is active…and it’s Juliette Wagner who reads the mails and answers them.

As a matter of fact, we have sent her a mail showing some interest in the high level courses of Scientology knowledge…and she took he bait !

Screenshot of the mail sent to Juliette Wagner the 3rd of January, 2020.

In order to demonstrate that this is not a fake , here you may find the email source (some informations have been blacked out).

We can highlight the presence of the domain “think-for-yourself.org”, if we verify with Whols thanks to domaintools.com we come across the CHURCH OF SCIENTOLOGY INTERNATIONAL : 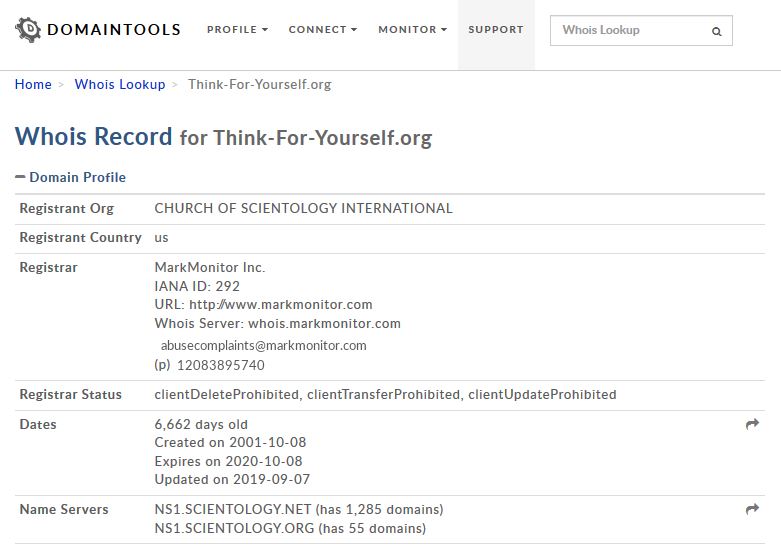 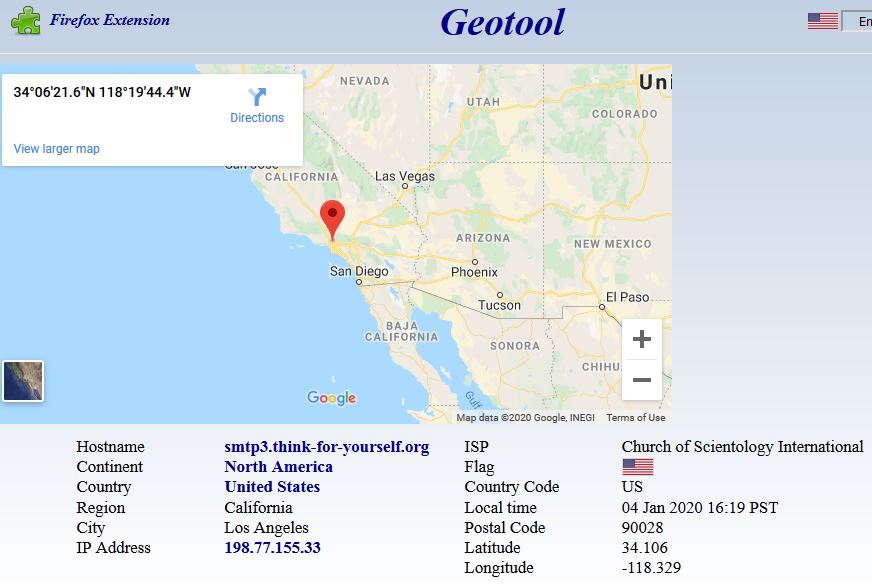 Screenshot of the URL available here.

But there is where you ask me “Is Ms Wagner in the States and not in Denmark?”

No, apparently all the servers of important Scientology organisations are based in the United States of America, here you’ll find another example, the AOSHUK, Advanced Organisation United Kingdom : 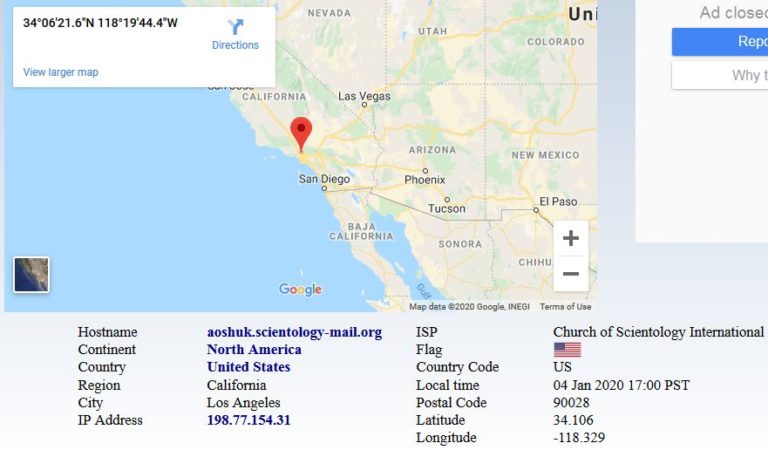 Following the publication of this article and following all the informations here included we ask ourselves if the “case of Gloria Lopez” could be relaunched.

Indeed, The prosecutor can request the reopening of the investigation if new evidence appears (witnesses, physical evidence, etc.). Only he can request this reopening; the civil parties cannot address the judge directly. (Ministry of the Interior procedures here)

New statements are considered to be statements by witnesses, exhibits and minutes which, since they could not be submitted to the examining magistrate, are however either likely to strengthen the charges which would have been found to be too weak, or to give the facts new developments useful for the manifestation of the truth (Article 189 of the Penal Code)

We provide with new elements which identify Juliette Wagner, always confirming her activity within Scientology.

These new elements obtained in a lawful way can be used by the police and the justice.

Consulted by our editorial staff, a former police analyst in the GR Sects group is surprised that the services which would have been seized of the requested investigation apparently not deemed appropriate to proceed in the same way to locate Ms. Wagner, indeed, most methods which made it possible to write this article are based on the OSINT.

It would not seem very complicated for a French magistrate (or the Central Office for the Suppression of Violence against Persons if it is again seized) to request European mutual legal assistance from their Danish colleagues, this document available on the site of the ministry of justice indicates the broad outlines, this document in English available on the site of the council of Europe indicates the details.

In order to keep sensitive informations, some parts of this documents and the screenshots have been crossed out.

This article wouldn’t have been possible without the indispensable help (informations to final check, through the methodology, and translate :D) of certain people, thanks to them !

This article is free, don’t hesitate to copy, translate, tweet, share…just insert a link to the source, thanks ♥

Unpretentious, the facts one again prove us right as to the seriousness of our publications on this subject.